Have You Visited The 20 Countries Where People Live The Longest?

The annual World Economic Forum (WEF) Global Competitiveness Report has just revealed the top 20 countries where people live the longest. And in the top 10, are countries which are also well-known for tourism.

So have you visited some of these countries?

According to a report by Linda Brinded of Yahoo News, Singapore is the country with the highest life expectancy in the world, according to a new report. The southeast Asian country clocks an average life expectancy of 74.2 years. In second place is Japan, which averages 73.1 years.

It uses surveys as well as official government and statistical data to organise the findings into 12 pillars, including health, skills, financial system, infrastructure, and institutions.

The WEF also lists countries by health life expectancy — the “number of years that a newborn can expect to live in good health, taking into account mortality and disability,” according to data from the Institute for Health Metrics and Evaluation, Global Burden of Disease 2017.

Singapore and Japan commanded the top of the list while Spain came in third with 72.1 years, followed by Switzerland with 72 years.

Unsurprisingly, healthy diets and cleaner environments are the reasons for the longer lives of people living in the countries at the top of the list.

Japan is famed for its staple food products — fish, seafood, vegetables, whole grains, and tofu — which are continually cited as some of the leanest and most nutritionally balanced food to eat. Spain’s ‘Mediterranean Diet’ also is heralded by scientists as helping prolong life.

The report is used as a tool by over 100 of the world’s leading companies and 100 international, civil society, and academic organisations to make the economy, workforces, and businesses more productive. and integrate equality and inclusion into the new economy, aiming to reach one billion people with improved economic opportunities.

So maybe you should visit these countries for your next vacation and find out for yourselves, why their citizens live longer lives! 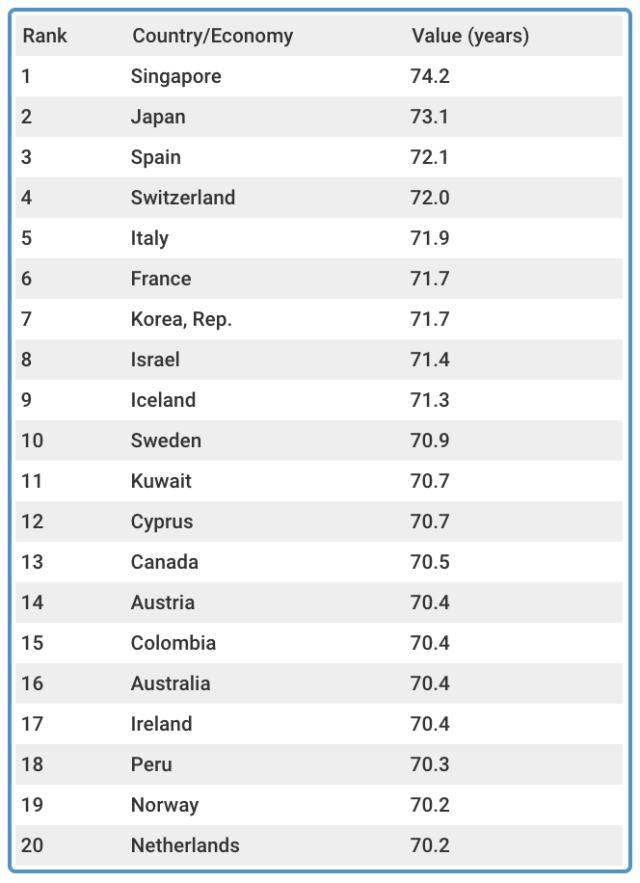 Melaka After Dark: A Walk through History and Folklore

We are a passionate, fun and colourful bunch of people!

The Maasai Tribe is an ethnic group of people who

In the North African nations of Algeria, Mauritani

Fancy a chance to sleep inside an iconic double de

The exclusive Jaffa Hotel has so much history! In

Selamat Hari Raya to those celebrating. Have a sa

You’ve probably tasted truffles before, but do y

While you are cruising down Route 66 you can pull

Armenian lavash holds a special place in the count

If time and money is on your side, then on adventu

Attractively set in the Dago Pakar district of Ban

Sleep at Everest Base Camp, Nepal - The trek to Ev

Enrich your life. Dream, explore and discover the

Jaddah’s Kitchen is excited to introduce our fam

For a unique descent into the Earth’s belly - de

Borscht is a delicious soup that’s a a must-try